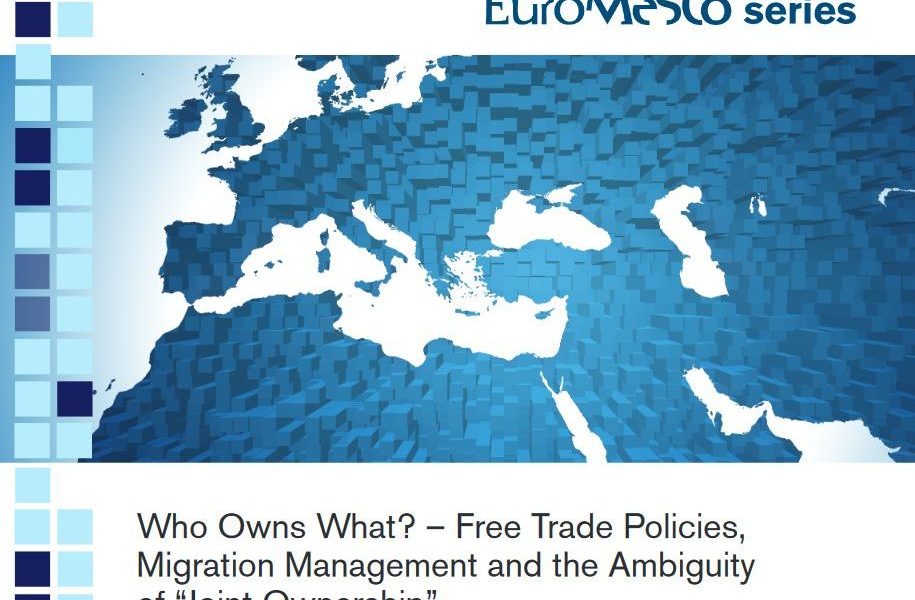 Who Owns What? – Free Trade Policies, Migration Management and the Ambiguity of “Joint Ownership”

The concept of joint ownership has become a buzzword since the 1990s not only instrategies of international organisations, such as the United Nations (UN), the WorldBank (WB) or the International Monetary Fund (IMF), but also in European Union (EU)foreign policy (Ejdus, 2017). Since the launch of the European Neighbourhood Policy(ENP) in 2004 joint ownership has been defined as one of its main principles.Accordingly, the EU states that “joint ownership of the process, based on theawareness of shared values and common interests, is essential. The EU does not seekto impose priorities or conditions on its partners” (European Commission, 2004, p.8). It continues by holding that there “can be no question of asking partners to accepta pre-determined set of priorities. These will be defined by common consent and willthus vary from country to country. The endorsement of these plans by the highestinstance of the agreements in place will give added weight to the agreed prioritiesfor action” (European Commission, 2004, p. 8). Thus, EU policies should be set withina partnership relation between the EU, and its counterparts and priorities should bedefined by common consent. The EU aims to engage “governments and all leadinglocal stakeholders, including national parliaments” (European Commission, 2010c citedin Jonasson, 2013, p. 47).

The importance of joint ownership was reconfirmed within the revised ENP in 2015,where the EU has declared that “differentiation and greater mutual ownership will be thehallmark of the new ENP, recognising that not all partners aspire to EU rules andstandards, and reflecting the wishes of each country concerning the nature and focus ofits partnership with the EU” (European Commission, 2015a, p. 2). The goal, as the EUhas claimed, is to increase cooperation with neighbouring countries to an eye-to-eyelevel and to follow an approach based on “both partners’ needs and EU interests”(European Commission, 2017). The revised ENP again acknowledges the importanceof involving relevant members of civil society as well as social partners in consultations(European Commission, 2015a, p. 3).

Despite the appearance of joint ownership in several EU documents and its use as anexample of an inclusive approach, the definition offered remains quite vague. Thus, it isunclear to what extent governments, local stakeholders, civil society and social partnersshould co-own certain policies. Whose considerations should count and should jointownership be operationalised within the decision-making or implementation process?How can the operationalisation of the concept be evaluated?

This policy paper critically investigates the EU’s concept of joint ownership. Drawing ontwo case studies, namely free trade policies and migration management, the paper7PAPERSIEMed.Who Owns What? – Free Trade Policies, Migration Management and the Ambiguity of “Joint Ownership” analyses the implications and limitations of the EU’s partnership relation with its southernneighbourhood. The paper focuses mainly on the Egyptian, Tunisian and Moroccancases. Due to the vague definition of “joint ownership” and in order to be able toanalyse the two case studies, the paper suggests, based on EU documents, two typesof ownership: 1) governmental ownership and 2) societal ownership. Using thisconceptualisation, the paper analyses the involvement of different stakeholders andthe main beneficiaries of EU free trade policies and migration management. It arguesthat there is a lack of governmental as well as societal ownership within the two EUtools, Deep and Comprehensive Free Trade Agreements (DCFTAs) and MobilityPartnerships (MP) as it is mainly the EU that sets priorities, norms and standards tobe adopted by partner countries. Government representatives and civil society actorsfrom Mediterranean Partner Countries (MPCs) perceive their relationship with the EUas asymmetric rather than based on an eye-to-eye level (personal communication withTunisian and Egyptian officials and civil society actors, 2016-2017). The perceivedreluctance to fully engage MPCs – government officials and social actors – in the implementation of EU policies has led to their growing mistrust of the EU.

If ownership is applied at all, then it is often reduced to a state-centric approach eventhough the EU is rhetorically attached to the inclusion of actors going beyond thegovernment. The lack of “societal” ownership becomes evident as consultativemechanisms suggested and applied by the EU to include grassroots organisationshave in most cases no implications for policy-drafting processes. Thus, there seemsto be a gap between what the EU refers to in official documents and theimplementation on the ground. In this case, both MPs and free trade policies mightexclusively serve the interests of the government and linked elites in the region – thisdepends on their ability to “own” certain policies rather than addressing the needs atthe grassroots, such as poverty reduction or the creation of job opportunities. In thisrespect, the legitimacy and sustainability of EU policies is at risk (Ejdus, 2017;Dworkin & Wesslau, 2015).

The paper proceeds as follows: the first part investigates the concept of ownership,illustrates several dimensions of its ambiguity, and analyses the EU’soperationalisation of the concept. Subsequently, the paper sheds light on the limitsof ownership in the realm of free trade policies in general and DCFTAs in particular.The following section investigates the concept of migration management and MPs. Theanalysis is based on primary and secondary literature review as well as interviewsconducted by the author with Egyptian and Tunisian officials and civil society actors, aswell as with EU representatives in 2016 and 2017.

Link to the paper